After Daelkyr introduced his framework for Dragon Age a couple weeks back, I thought my group and I would give the game a go. Turned out that due to other issues, the group is really 2 players, each playing 2 characters, but it's a group anyway, dangit!

We've been running through the Dalish Curse (the intro adventure in the game), using a modified version of Daelkyr's framework (I'd worked with him on it after doing some modifications on my end in order to run the first session, which was two weeks ago - since then, I made other additions to customize it to my group's needs, but the heart of it is still Daelkyr's). In any case, today was session 2, during which we went through 3 encounters of various types (aside from some setpiece roleplaying and exposition scenes). In the shots below, the red and green rings are just there to make it easier to see the tokens against the backgrounds.

First, the group encountered ambushers from the local village (long story; suffice to say the local toughs decided to rattle some cages) but managed to talk them into accompanying the party to the site of a crime they were investigating. It worked out. Would have been a good ambush, but it turned out a different way. 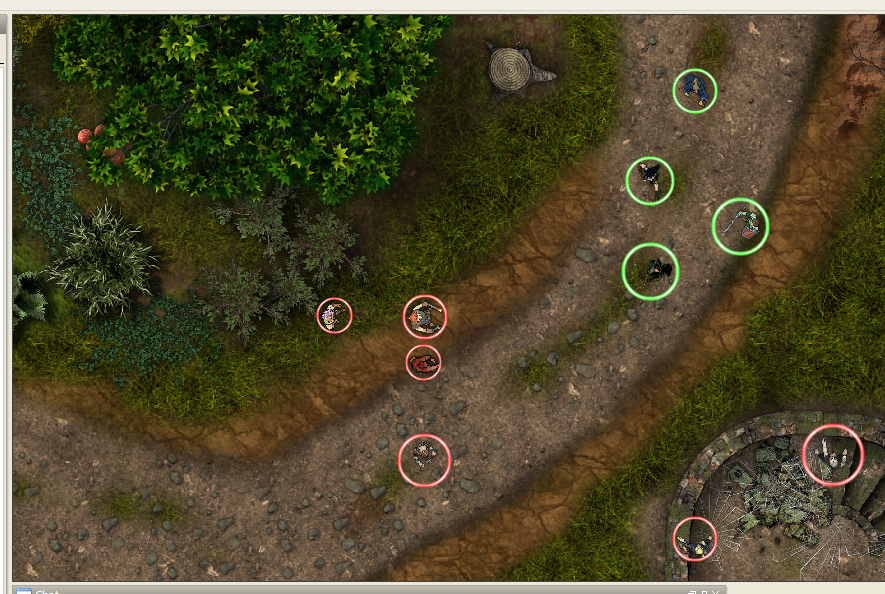 The second one is an attack on an abandoned campsite (being investigated) by hideous darkspawn, who were rather quickly dispatched by the group (though one escaped, one of the Rogues tracked its bloodtrail through the forest). 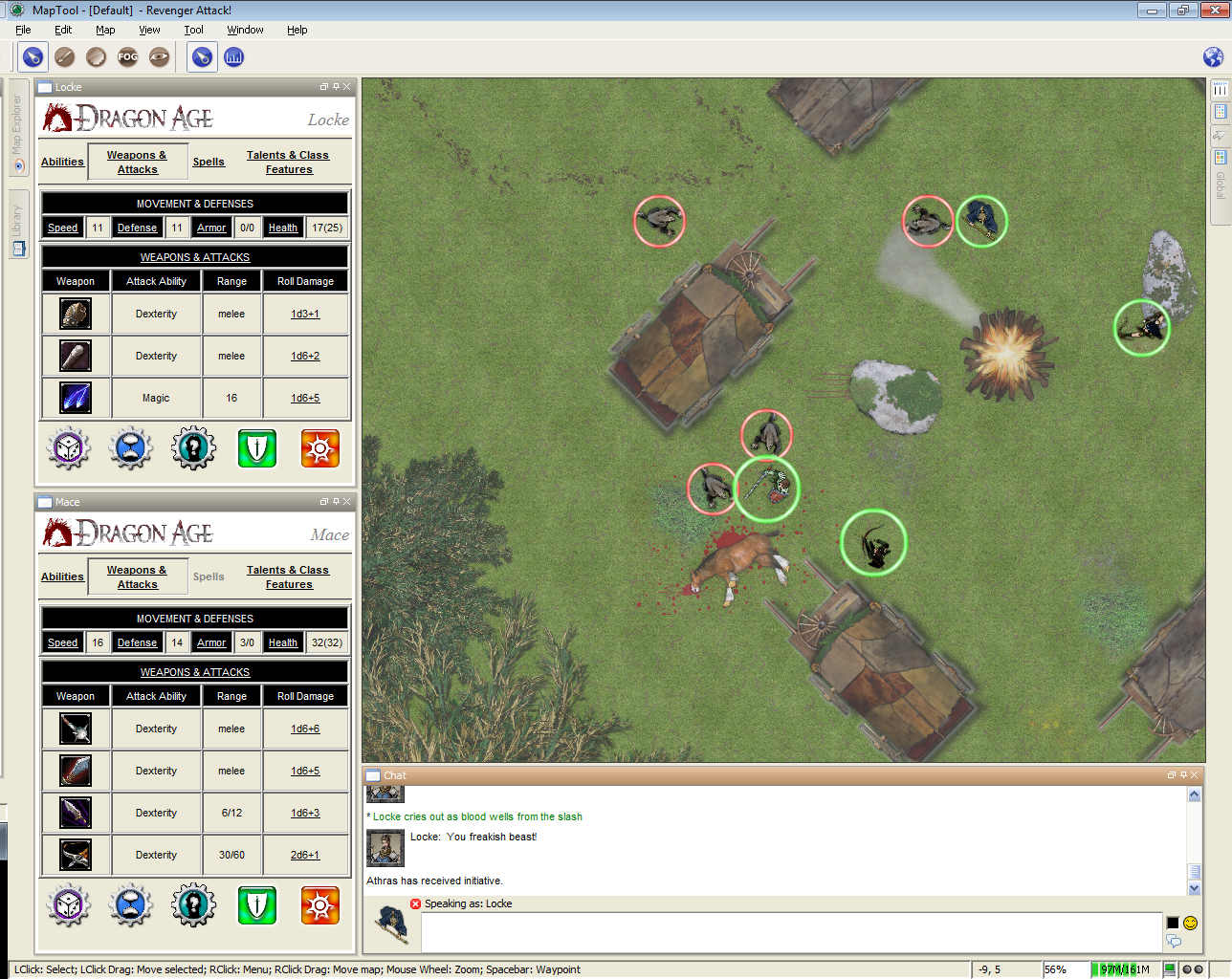 Finally, the group had to cross a slippery bridge, while assailed by blight-tainted crows. This was not nearly as tense as I thought, as the group calmly put down most of the crows before even trying to assault the bridge. Crossing the bridge itself was tricky, but everyone made it despite a couple close calls. Here they are, enjoying their across-ness. 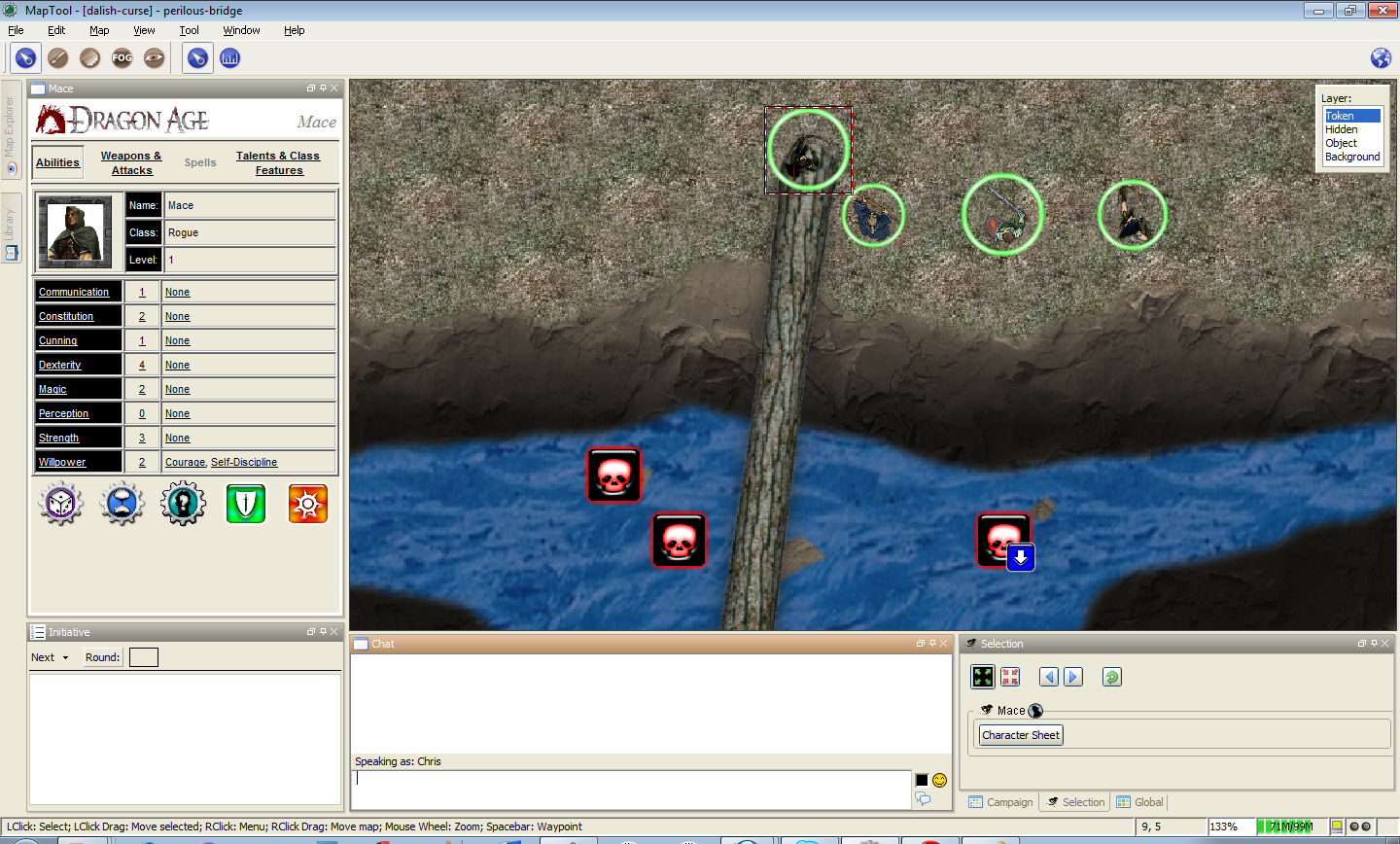 Used MapTool b63, no hiccups / disconnects or problems of any sort (though I've noticed that for some reason it stopped remembering that I had the token macro panels open when it reopens - that may be due to me screwing with the MT code a bit; perhaps even a "test run" from Eclipse is using the same .maptools directory?). Not a crisis, but interesting.

Sounds like fun. I still haven't actually run the game myself. Really need to get around to that. I like what you did with the top-down tokens. Devin Night's, right? Oh, and the framework looks very pretty. Barely even recognized it. Hope you continue to have fun.

Daelkyr wrote:Sounds like fun. I still haven't actually run the game myself. Really need to get around to that. I like what you did with the top-down tokens. Devin Night's, right? Oh, and the framework looks very pretty. Barely even recognized it. Hope you continue to have fun.

It was a good session (and the framework's not that different, really - what I did was basically take the character sheet as one thing and split it into "tabs", so the whole thing was shorter and I could cram two character sheets top and bottom).

The tokens are Devin Night's, yes - it's a good token set! Top down's change the feel a bit for me; it's a bit more immersive so long as you get reasonably well-matched tokens.
What I'm Working On

I really like the Road map. The road with the dirt curb, scattered rocks, and green patches is very authentic. Stay away from the red mushrooms though, they're toxic!

Yeah, I love that one - I didn't make it, though; I got it from RPGMapshare. There are two or three of them I bust out when there's a "You're ambushed on the road to __________" encounter.
What I'm Working On

Hey Rumble, just want to say thanks for the great post! I just picked up dragon age from my local FLGS and am excited to get this game going in maptools with my friends I game with online using vent!

I'm VERY new to maptools but pretty good with a pen and paper rpg. So I hope you don't mind if I send you a question or 2 regarding playing with the framework!

I'm open to questions but I'm not sure how much help I can be. The framework I use is an "offshoot" - I'd provided some suggestions on Daelkyr's framework when he was developing it, but as I was playing in an active game I kinda took it in my own direction.

So what I have on my system is not up to date with Daelkyr's stuff.
What I'm Working On

Hello Rumble, I'm new using maptools and I wanted to try running the Dalish Curse using this tool, I've been having a little bit of trouble though, my first session some people couldn't even see the maps because of crappy connection. I was wondering, do you have any advice on how to solve this problem. Also If its not too much trouble, could you lend me some advice to run this adventure? (I know i'm asking a lot, its just i'm also new at this gm business ^^;)

Thanks in advanced,
Rurouni_Alex
Top
Post Reply
8 posts • Page 1 of 1