I ran a one-shot out of this module last night. Game flowed smoothly. A couple times, got 3.5 mixed with 4e(originally a 3.5 module). Map tools worked just fine. Couldn't figure out how to erase drawn lines that are classified as objects. Couldn't figure out how to renew uncovered fog of war. The dice roller had many fumbles, though, it was mostly on one person. The ability to change the names of tokens helped.

The players came upon an abandoned mansion. They easily dispatched the kobolds and their scorpion pet outside.

Inside, they had some small difficulty with the 6 minions, but it ended ok.

Third, and final encounter. A person fell unconscious twice. This was designed to be hard. Because the group had been half the size the module was made for, they fought half the creatures. A minion in particular couldn't be hit. This minion outlasted all the others. Uberminion will be back.

Re: 4e Maptools level one - Everyone's a Critic

Today, we had a fight against a solo brute.
Fighter marked the monster, and paid the price, heh. In the end, the pot-turned-monster was cooked well done. Bon-Appetite 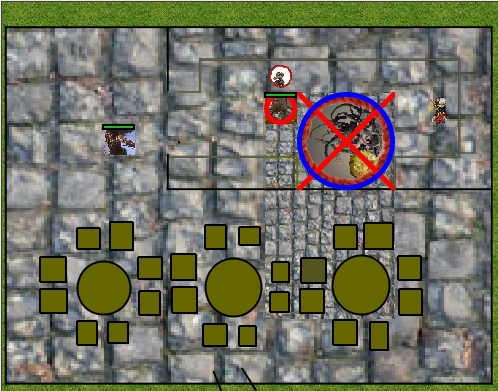