Author's Note: I'm the DM, not Jonathan the character.

The Order of the Fiery Shield fled through the narrow tunnels, heading towards the source of warm wind rushing by them. The fungal giants, too large to fit through the tunnel, hooted in fury. The bass trumpet of their angry roars shook the caverns as much as their fists did. The giants tore apart rock and stone and buried the tunnel. The dim intelligence inside the giants minds hoped that they had buried the bringers of fire.

With the tunnel leading to A'shiruum Forest and the mushroom kingdom city, Deepholme, blocked off, the Order pressed onward after enjoying a long rest. The warmth of surrounding rock provided a much needed respite from the cold, damp caverns in the fungal forest. After traveling nearly a mile through the winding warren of tunnels, the heat became almost unbearable, but the Order continued despite it. They had nowhere else to go. A warm, red glow mixed with bright yellows and mellow oranges illuminated the tunnel ahead and the sound of grinding rock echoed.

The tunnel opened up into a massive cavern filled with bubbling pools of liquid rock and lava. A pervasive, sulfurous odor filled the cave and choked the eladrin and humes. Onyx merely grunted as the mossy hair upon his head and face wilted in the oppressive heat. The water that coursed through hidden cracks and channels within the earthens form move more easily, revitalizing the earthen in a way he hadn't felt since his rebirth. Exploration into the cavern revealed an ancient stone altar floating on the magma of a particularly large pool. A crystalline sphere atop the alter contained a lazily spinning fragment of red gemstone.

Mian took a greater interest in the stone as the Mark of Summer began to glow the closer it got to the fragment of crystal. Heedless of the danger, the eladrin bard took a running start towards the altar, hoping to use the earthens aid to make the leap. Blind instinct took over when he missed his footing and nearly pushed Onyx into the pool of magma. The Veil between the Mortal Realms and the Feywild parted briefly, giving Mian enough time to cross the distance from the edge to the altar.
A blast of hot rock and fire flared out of hidden openings along the base of the altar, scorching the eager bard. Moments later, a rumble of earth and stone singsong rang out in the cavern.

"What mortals dare to defile the Cauldrons of Morthuul?"

Across the cavern, a pool of magma churned and a thirty foot tall mountain of stone rose out of the magma. The stones glowed red hot after being submerged and magma hardened, creating a dense armor about the elemental creature.
Morthuul, once an elder earth elemental, had been corrupted by avarice and trapped a fragment of the Aspect of Summer, a World Spirit, within the binding sphere atop the altar. Mian shattered the sphere and the fragment was swiftly abosrbed into the Mark of Summer upon his forehead. The surge of energy strengthened the enchantment, though the bard had little time to reflect upon the sudden events. Morthuul had surged across the cavern floor and sent Janus tumbling end over end a couple dozen feet.

Rei weakened the fearsome foe, altering the granite stone of the elemental to sandstone. The weak stone left Morthuul unable to attack the members of the Order with his full strength lest he destroy himself. Jonathan leapt into the battle, blasting the corrupted para-elemental with knives of pure force, driven by the strength of his divine soul. The ferocity of the attack was enough to drive Morthuul back a step. A trickle of blood ran down the invokers arm, a consequence of the strength of his attack. Onyx quickly rushed to the battlefront, leaving Mian to take stock of the situation while on the altar.

Onyx lifted his warhammer to strike at the hardened stone of Morthuul and Mian saw an opening. A quick rhyme enchanted an arrow which struck the elemental, creating an avenue of attack for the earthen. The warhammer of the warden struck hard, sending a spray of obsidian and granite into the air. The fiery heat of the elemental ignited and showered Onyx with a blast of embers. Kell slide along the cavern floor with quicksilver motions and struck a powerful blow to the elemental that did little to no damage.

Morthuul caught the monk in a misshapen fist and squeezed mercilessly as magma flowed along the arm of the elemental. Kell thrashed about in pain from the intense heat and was then thrown bodily through the air towards a pack of magma drake whelps. The whelps, insensed by the scent of blood, launched blasts of fire from their tiny maws. Kell rolled to his feet and dodged the attacks as Rei blasted Morthuul with a hammer of radiant power. The attack left Morthuul reeling and unable to strike back effectively for a short time.

Blades of astral fire slashed through the air and scattered into sparks and embers on the stony hide of Morthuul. The cloud of embers settled around Onyx, warding the earthen from attacks for a brief moment. Onyx called upon fierce, tempest winds and slid the mountain of rock and stone away from his allies before cracking the chest of the elder elemental with a hammer as big as a mountain. A sheet of ice spread out from the warden, though it didn't last for very long before the heat of the magma melted it. Onyx's enchantment continually replenished the ice and steam spread out from where it melted.

Onyx was scorched by another blast of embers from the body of the elemental. The magma drakes tired of the flighty prey and sought after weaker foes amongst the Order. Their attacks had little effect beyond serving as a distraction. Morthuul's fist left a small crater in the cavern wall as he tried to attack the rogue, Janus, who had slipped past the warden and slid alongside Morthuul. Janus' blade struck a clever blow, brutally wounding Morthuul. Magma and stone flowed freely from the cracks in the elementals body.

Morthuul roared in pain and the magma pools responded to his call. An eruption of lava and brimstone blasted into the caverns and sorched most of the Order, though Mian took the brunt of a blast and hastily scrambled to put out the fire that had started upon his backpack. The magma drakes continued to attack Kell and the others, leaving a few scorched by the small but dangerous blasts of fire.

On the altar, Mian took a moment to murmur a majestic word, laced with strength and belief, that restored his vigor. Rising from behind the altar, he launched an arrow at Morthuul, knocking the elemental slightly off balance. To the north, kell had been flanked by two of the magma drake whelps. He leapt into the air with a series of spiraling kicks, but only scored a couple minor hits against one of the drakes.

Morthuul raised his fists and defiance against the Order, his first attack completly throwing him off balance as he fell to the ground. His other two attacks flailed around with little effect, though the frenzied action cause a lance of sunlight from Rei to splash against the rock wall behind Morthuul. The young invoker, Jonathan, moved closer into battle and attempted to blast the sight from the elemental with a malediction of blindness. The power failed Jonathan and left him open to further attacks from the elemental.

While the elemental flailed on the ground, Onyx stamped his foot and a wave of stony spikes erupted from the hot earth and stone, piercing the rocky hide of Morthuul. Rei dodged a blast of fire from one of the drakes, her concentration on the battle against Morthuul briefly broken. Janus used the distraction to slip into position behind the elemental and brutally wounded Morthuul again. He attempte to capitalize on the situation with a trickster's blade attack, but the nearness of the lava threw off his aim. Kell, evading two of the drakes with a drunken stagger, leapt into the air and crashed his foot against Morthuul once more to little effect.

"For once in my life, kicking isn't solving all my problems," Kell growled. Onyx chuckled and suggested that perhaps punching would work better. The magma drakes continued to harass the party members, even attacking Mian all the way in the back of the cavern near the altar. Morthuul stood up and launched a frenzy of attacks on Janus, Kell, and Onyx, but not a single strike reached its mark. Luck was definitely on the side of the Order this day.

The remaining moments of the encounter continued as much before. Morthuul was unable to do much against the Order after Rei's devestating first attack. Onyx was caught on loose rubble and had left himself open to attack from Morthuul. Mian saw that Onyx was about to get pounded by the elemental and chanted a powerful song of warning into his arror.

The attack nearly destroyed Morthuul and as he neared destruction, he submerged himself into the magma pool behind him, using the lava and fiery stone to mend his wounds. Another roar caused the magma to erupt again, leaving Mian on fire again and Rei cradling a painfully burned arm. As he rose out of the pool of magma next to Mian and the altar, the magma solidified on his exterior, creating a temporary shell of stone to protect him from attacks. 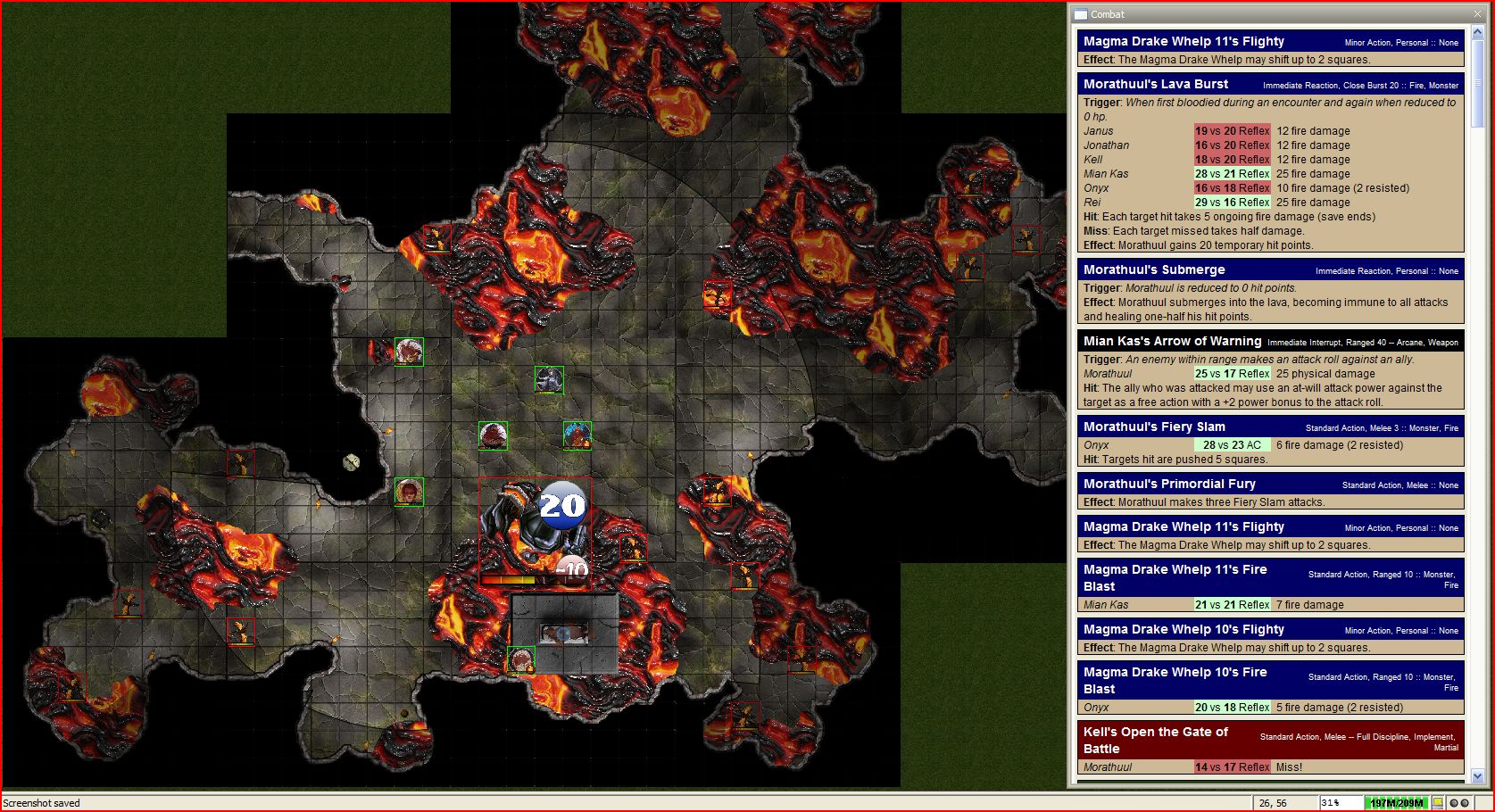 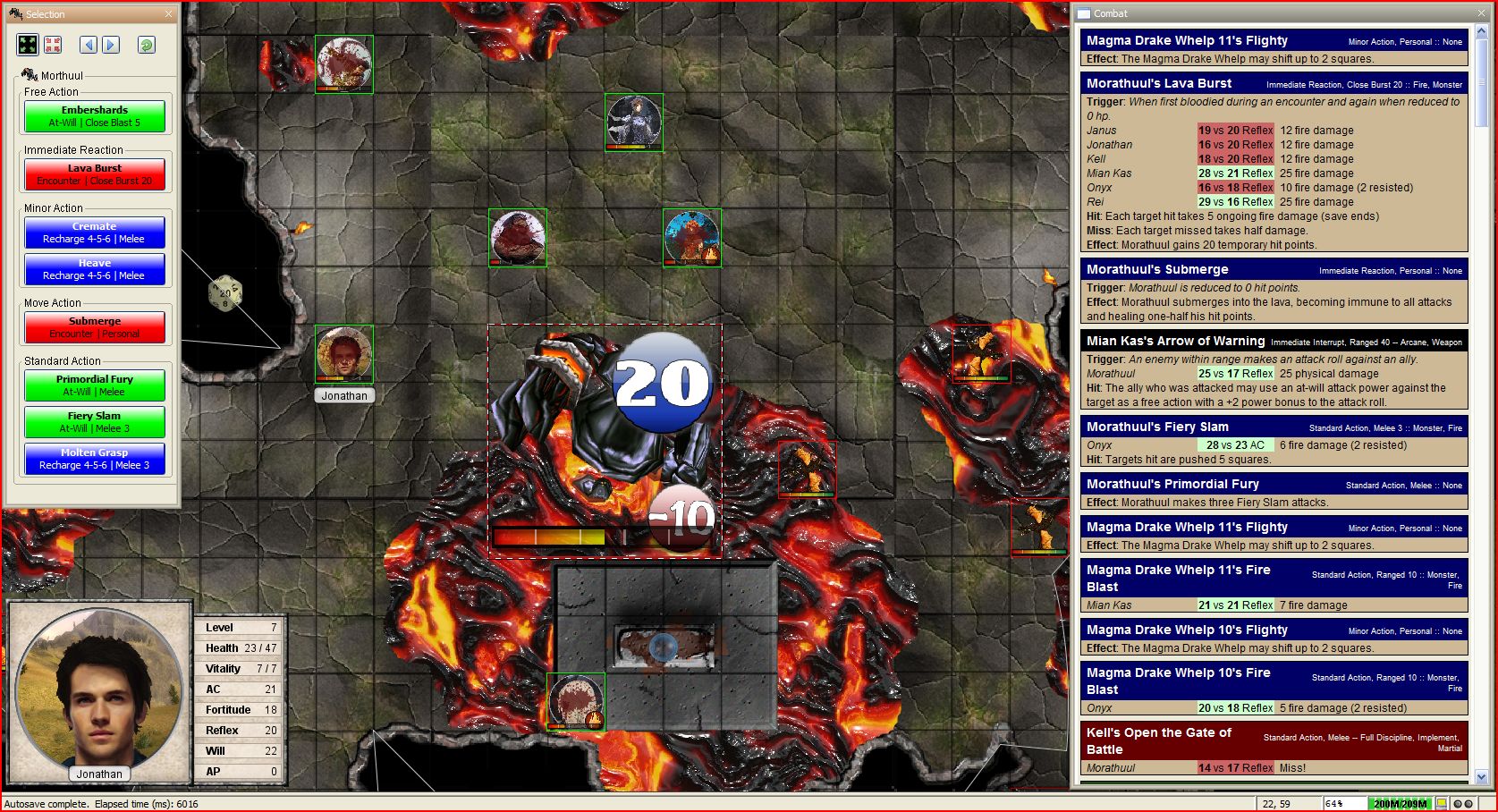