In regards to MapTool, I noted a couple of things that were of note. I recently downloaded the demo for Fantasy Grounds. While I dislike the program interface greatly, the look and feel of it was very cool. I have, in my own way, decided to emulate the VTT to the extent where I have a woodgrain texture as the background and a parchment image on the Background layer. Upon that, I have been drawing maps so that they are imposed over the parchment image. Example cut from a screen shot. 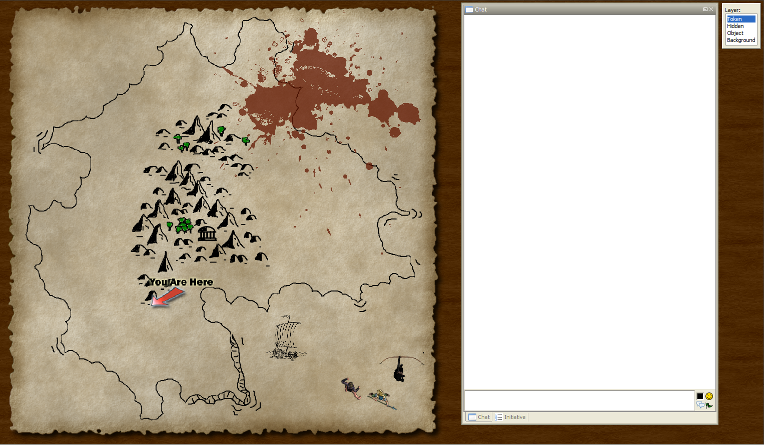 This is working well, except that drawing on the background layer places the drawing below the parchment image. It would be nice for drawings to rest on top of any image resources. Maybe something for the 1.4 release. In the meantime, I can continue drawing on the Object or Token layers. Since some of the "dressing" ends up on the Object layer, I have been using the Token layer exclusively for drawing.

The only other thing that I thought might be nice would be to have a basic font control bar that adds in the HTML elements for bold, underline, italics, etc. It is not overly difficult to type in, but anything that could save time is always welcome.

Other than that, we had a great time. Mind you that I have used MapTool off and on since the 1.2 era. It has only gotten better with each passing release.

I have also been using this game to test out my evolving 6th Edition framework. I noted a couple of improvements that I can make to the Maneuver Builder tonight. Expect those in the next release.