Forum rules
This forum is LOCKED. If a thread belongs here, use the "Report" feature of the post to let a moderator know to move it. General discussion should occur in the User Creations or MapTool forums.
Post Reply
32 posts

wolph42 wrote:I've got a method for that too. I quite often update small stuff in the BoT. in the ontokenmove lib waaay at the bottom there is a version button (black). This updates libversion property on the token so when you OCL you see which version it is. Minor updates I call e.g. 35a, 35b, 35c etc. and these are NOT announced on the forum until I move to version 36. then I move all the 35a,b,c,d, etc changes under version 36 and announce that on the forum. Check out the lib to see what I mean. I just released version 35e but its unannounced.

Okay sound man, thanks for all the advice I'm not really used to any of this so it's very much appreciated. I just wanted to get the last version out but I'll probably do something like that with the change log on the token and I'll post for more significant updates. And yeah dropbox is pretty nice to use as well.
Top

It's been a long time coming but I've finally gotten around to tracking conditions within the framework. A few other minor changes, if you've downloaded this recently you will probably have the majority of the new features aside from condition tracking as I've been making some small changes without posting about them, you can check the exact version you have by checking the black version macro at the top of the Lib:Pokemon token which outputs a changelog when clicked.

Not looked at this for a while but a nice update that just make the game that bit easier to run to get me back in the swing of thing. Pokemon Centers and daily injury tracking are the main additions, before these required going through and manually healing pokemon and tracking daily injuries outside the framework so were badly needed. Luck/Pickup rolls were something that slowed the games I am in down considerably as we had to look at the table, roll d20, check what items were available count how many there are and then roll a dice to randomly decide on the specific item, this is now done at the click of a button. Various minor tweaks since the last update as well.

Someone PMed me asking how to get pokemon sprites as opposed to token images for the pokedex. I knocked a table up real quick and decided to throw it up here as well, it has the sprites of Gens 1-5 from Elemental Knight's sprite pack(don't fancy hunting gen 6 images down right now). They look pretty nice in the pokedex(see below) but the issue is it will generate tokens with the sprite image as well and I personally don't like using them as tokens but some people might. 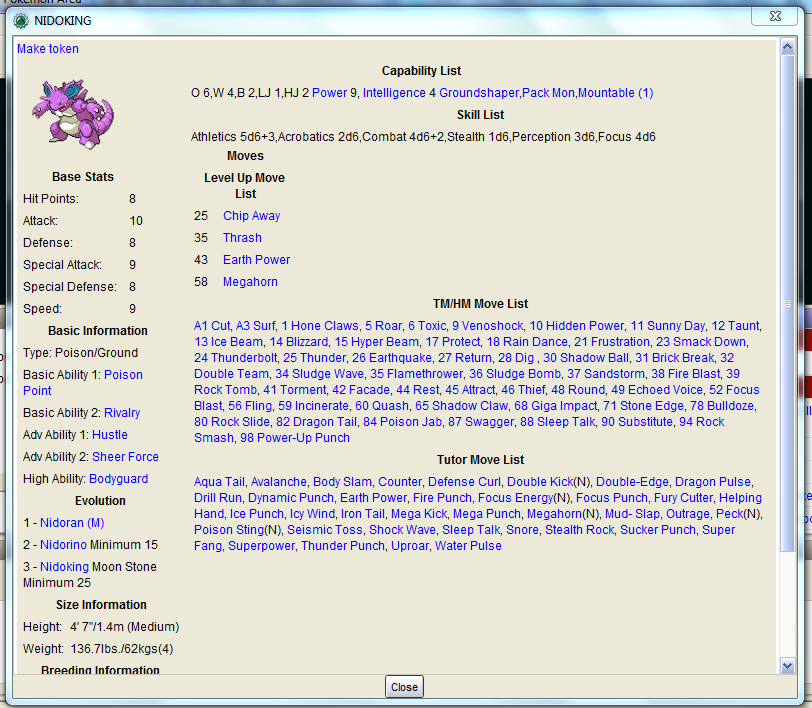 So If anyone wants to use it, download it below, import it to the framework(click Window->Tables first) and change the table name to PokemonTokens and delete the old PokemonTokens table. I might try to incorporate them both into a future update but for now you'll have to do the dirty work yourself.

Wanted to get this update out since I might not be able to work on the framework for a good while(haven't had much chance to lately)as such some of the features aren't quite fully polished but are still usable and quite handy particularly the evolution as that was a real pain to handle before.

[spoiler=Important Note for GMs:]A few changes had to be made to token properties as such type, teleporter movement and underwater movement will be reset. I included a link on the GM screen that updates selected tokens to their old values. You can either export the two Lib tokens(Lib:Pokemon and Lib:Trainer) and the various campaign properties and import them to your current campaign save exprt a map with all the tokens from your campaign and import them into the new framework file and update them there. Make sure not to have any duplicates of the Lib tokens[/spoiler]


Also 1.6 had this change I omitted from the changelog
Top

Normally wouldn't post about an update where so little has changed but this is something that could come up a lot for anyone using it so I figured it was important.

Apologies for another post but another bugfix to sort out an annoying bug that I completely missed that threw up errors when trying to edit trainer capabilities. This will probably(hopefully?) be the last update until 1.7 which should be a pretty big one.

And I lied, turns out some of the behind the scenes changes caused more issues than I thought. I caught an issue where STAB checking for moves was very wonky so this is a very important fix.

Nifty. I didn't even know this tabletop existed. I'm not a huge Pokemon fan, more monster rancher personally although they are similar. This would be a fun game to one-shot and give a whirl. I may be surprised and really like it.

And now I want to play Monster Rancher...

Yeah it's a surprisingly good system but it has a lot of things that slow it down by default and a load of paperwork to keep track of which is why I made this framework and it really helps with both of those and you can concentrate on the fun parts of the system(if I do say so myself).

Biggest slow down right now is probably inputting trainer features which is the next major thing I'm working on.
Top

Fixed an issue that maptool had with Java 8 messing up this framework. Also 1.6.5 change log.

Okay so took a bit longer than I hoped but it's done to a level I'm happy to release. I'm sure there's something not working properly so please report any errors or issues that crop up.

Bear in mind this is a bit of a save breaking update. So it may be better to just remake all your tokens. There is a link to update all selected to 1.7 on the GM screen, this will reset all capabilities and skills so you'll need to redo all these manually and this may not work as well as I would like but it's there so if you have a lot of tokens this might be worth doing.

I will keep the last 1.04 version available if people want that for those games but I will no longer be updating it. You can get that here(Victini and stupid 13 bug fixed).

There should be a big update coming soonish but I've been putting it off. Did a load of bug fixes and tweaking along with some smaller additions to get my head back in it for now. As usual, let me know of any bugs encountered and I'll sort them out ASAP.

Okay this is a big one and with some things I've been putting off for a while but believe me it will make your life a whole lot easier, particularly if you're a GM. Features and edges are now pre-stored in the framework similar to how moves have been for a while. Adding them to a token takes just a few seconds compared to the old manual method. This is particularly useful for GMs making NPCs. Other than that a few other quality of life updates which you can read in more detail below.

This framework has come a long way since I started it back when I played PTA. It's not hugely popular I know, but I know there are a good few people that use it(if you haven't checked it out I would really recommend giving it a chance and if you have any questions on how things work don't hesitate to ask here). I've pretty much handled all the things that are needed for the games I play in and there's only a few more things to handle from the books. Beyond that supporting homebrew is a big goal of mine and is something I'll probably look at soon. Other than that it's mostly tweaks and just keeping it up to date with the core. But I would like to ask people that do use it for opinions on how I could improve it in any way. I can't make any promises but I'll at least look into any suggestions.

Important: If you are transferring old tokens into this version of the framework ensure you select them all and click the Update to 1.8 link in the GM screen. This will reset features, edges and conditions on these tokens. Unfortunatly this will mean you need to re add any features/edges that were on them before so I recommend you take note of this before hand. I made the decision that writing code to convert edges and features from the old format would be too much work and I wanted to get this out as soon as I could. I think you will see how easy it is to add features now though and that it will be worth it.

Features and Edges now prestored: Adding features and edges should be very easy now. On the benefits page for trainers click on the features or edges header to add one. This will bring up a dropdown box that can be searched. It currently contains all features from the 4 main PDFs. If a feature has related talents like chef's recipes or martial artist's martial achievments these can be added in the relevant feature itself. Some features have this set by default but any feature can be edited to allow this. These are added in a similar way to features note that all recipes/martial achievments/blessings/etc are stored together.

Additional Conditions: This is a new tab on conditions to handle some things in the game as opposed to being actual status conditions. Cheerleader conditions have been moved here and new additions are detailed here.