Forum rules
Discussion regarding lmarkus001's framework only. Other posts deleted without notice!

I've edited the content.xml directly for the last spot. I had to modify a lookuptable called SysLocale

Love this framework and hope it never completely stops working (altho it may need an overhaul at this point lol). But can someone point me in the right direction for adding the PF critical/fumble cards to the diceroll? IE after the attack is made it automaticly shows it? been doing it manually but would like to add it to the autoroll
Top

popanas wrote: ↑
Sat Apr 04, 2020 6:48 pm
I'm working with your framework for my campaign, but I have custom skills for the characters, anyway I can edit the skills? I have no experience in Maptool macroing and the only way thus far that I've found to change the skill names is to edit the XML directly, which is clearly a bad way of doing things.

Skills are some of the gnarlier bits of this framework. But if you wish to change some, I would start with the Edit Globals macro. In it will be a list of the skills that are referenced for the particular ruleset (D&D vs PF) you are using. With that you can tweak some skill information. BUT that references a couple of other Tables that have the rules description and other stuff. Also there are differing types of skills, some are subsets like Perform(wind).

It is designed to be flexible but horribly complicated lol.
D&D3.5 / Pathfinder Framework
Top

Allright, I found two bugs dealing with extra critical damage, and managed to fixed one.

The first one is that you can only add a roll to extra crit damage when you are editing weapons. adding 18 won't add the damage. but 18d1 will. I found this when I was trying to stat in the proper damage from the mythic power attack feat.

The second bug is that when you critically threaten, the extra crit damage is added to both the crit damage, and the non crit damage. I manage to fixed this and I figured I'll share the fixed macro. The macro this code is in is called libAttack.sub on the Lib:libDnD35Pathfinder token. (it's the second purple macro in the Combat group)

Attack with the glitch

what I did was remove the DmgExtraCrit.total from line 306.

and added the value to line 309

doing this caused the damage to show up in the total damage, but not in the tooltip. in order for the tooltip to show properly I added these two lines of code at line 322.

this fix works with the attackDialog, Attack(frame), and Mass Attack macros

This is Just a FYI. Since this hasn't really been updated in a while I'm currently working on a update for my group. Here is my plan and progress.

Show modifiers (but not dice roll) if the player selects GM eyes only. Show nothing to player of GM rolls it. - Done
Option for unchained Action Economy in edit global - Done
Update Bag of tricks - planned
Figure out a way to make it easier for GM to add in custom skills - no promises

I'll post the update for everyone when I'm done.

Poe, thanks for the update. I made a small change to the extra crit damage. Basically, the last line was forgotten, so I added it.

Originally, it was just supposed to add to extra damage, but forgot to include if() for crit condition, but I like your solution better, so left it there.

The line itemization worked fine for tooltip, so I appended value to the extra damage so it shows the correct math with the result.

As with the other extra damage, multiple entries can be made using a list.. ie 10, 2d6 means there's extra damage of 10 and 2d6. Works for a single number or dice expression as well.

These changes have been applied only to "Compatible" version only. 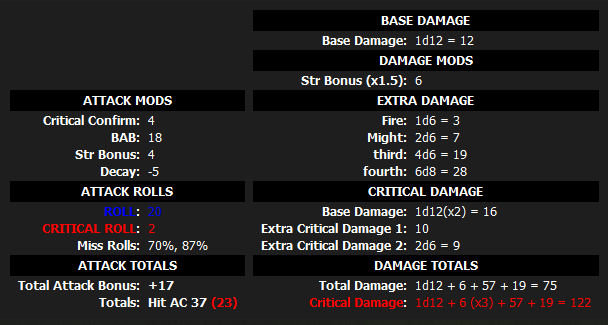 I did make a stealth update to the "Compatible" version a lit bit ago. Here is that change.

Sheet Macro in campaign window forces token type. Just copied code from Edit Char which does the same thing. Some people forget to change the token type from Basic and get errors. This prevents that.

Fixed a longtime "bug" which is more like error checking for bad data in the skills. Now if you leave a skill mod blank it will put a 0 there. This prevents funky output on skill checks.

This change is made in charSkillCheck

I moved skSize lines up from bottom so they are grouped with other skill mods. Doing the number(0 + var) trick saves me from having to check for blanks.

All these updates will be applied to "Compatible" version after I finish these posts. The GM Notes of Lib:libDnD35Pathfinder now shows the last update date on token, 8-7-2020.
Downloads:
Top

Ok Here's my update. I did not update Bag of tricks as I wanted to publish these updates and did not know if updating BoT would break things, but it looks like a simple replace the token to update. I also haven't looked to see what is needed to be done to add custom Skills.

Feel free to let me know if you find any errors or have suggestions for new features to add. (I'm also assuming no one minds me updating this macro-set)

Given that I've changed both the Global Macros and added new properties, The best way to update your campaigns is to export the campaign maps from your old campaign into a new campaign with this macro-set.

Added a few macros I made for this macro set for tokens that can be found on the libraries map.
note - these macros need to be edited to work properly similar to the "simple toggle ability" macro Fixes, including aliasmask's fixes
elements changed

Lib:libDnD35Pathfinder macros changed (may of missed one or two, sorry)

How can I change my Initiative modifier to add a trait bonus? Reactionary provides me with a +2 trait bonus to initiative, but for some reason I don't know how to add it.
Top

I would add it as an item. I think there's an edit items button.
Downloads:
Top

I am getting a error when trying to change my feats on a token:

I get a similar error when trying to update a weapon:

Going to need more info. I opened a brand new campaign MT1.3.91.08.01_DnD35_Pathfinder Compatible.cmpgn selected a pregen character on libraries map for pathfinder, clicked Edit Char and selected Feats and Weapons and neither gave me an error.

edit: For example, you can provide the problem token in question. You can also go through each step before you get the error. Let us know which MapTool version you're using as well as the Framework. There are 2 campaigns to download where the "Compatible" version is for MT version 1.5 and later.
Downloads:
Top

I am using MT 1.8b2 with the FW that is provided by Poe Black a couple posts up from this one. I have a token selected and try to select the diamond next to Feats on the charsheet(F10) for that token. The other was clicking on the weapon on the weapons tab to edit it I get the error as well.
Top
Post Reply
179 posts