Update: I fixed the links and added a link to all of my maps.
Licence: Public Domain
Background: I'm using this as the secretary/waiting room for a big CEO type in a modern/SciFi campaign (hence the larger door on the bottom). The boss is sort of eccentric and a bit of a minimalist, so I kept the colors muted and the art (the steel ball, etc) abstract and to a minimum. I'm having the portrait behind the secretary be of a famous leader - NOT the CEO. I think the allusion makes the CEO's image of himself more apparent. Also I'm not using this for combat, but I like to do maps for important sets to give the feel I'm going for without relying too much on verbal descriptions.

Advice and/or comments are welcome. The desk and the ball are my first picture-to-object jobs, so let me know how I can improve on that if you like.
Last edited by joshsziegler on Sat Jan 25, 2014 2:11 pm, edited 1 time in total.
Top

Having shadow and texture is pretty key to a realistic scene.

The floor texture is really nice except it just seems flat because of the low contrast. I increased the contrast so the pattern pops. I also added some more texture with gaussian noise (a bunch of speckles).

The walls don't really look like walls. Using a 3D effects bevel fixes that. And to add more depth to wall, drop an evenly dispersed shadow around it (no offset) with like a 10px blur, then do another shadow with a 10,10 offset and a 20px blur. Reduce the opacity as desired. Also, where doors appear, I cut out that area so the bevel will show up at door jam.

Don't be afraid to clean up pics grabbed from the web. The vase and doors had way too much shadow and lost some definition. I cleaned those up first. Then I applied a 3d bevel to vase to give it more depth then did the same thing I do to the walls with shadows reducing opacity to 50 percent. The doors I duplicated the door part to make it thicker and put a separation for the double door and copied the handle bits to center.

The steel ball was too blurry to fit in to the scene, so I grabbed some image, cropped some parts of it and put over the ball. The image seemed a bit too detailed, so I reduced the detail with a tool that smooths patterns but keeps the edges, but only by a little bit. Then I put in my typical double shadow for both items. The wear pattern down the middle seems a bit too uniform, but I left that alone.

I hope these tips help you out. 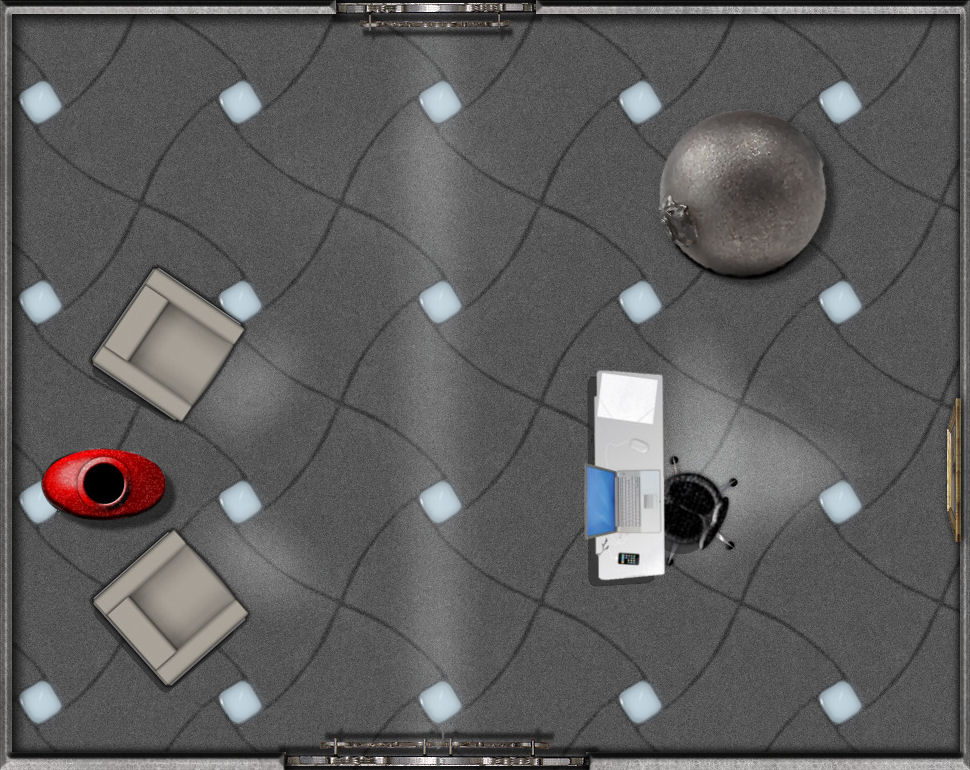 First, thanks for taking the time to help me out and edit the map! Your changes look great. I tried to duplicate your process in GIMP with so-so results:

- Messed with the contrast of the floor and changed the background color to make it darker. I was originally worried about it over powering everything else, so I made the background white, but I like the new look.

- I agree the walls look poor. I couldn't figure out the 3D bevel technique (in GIMP) though. I need to do some more digging online. I did add the shadows and placed the doors in the walls like you did.

- I see what you mean by the shadow on the doors, ball and vase. I removed those and put in my own softer versions to match the chairs and desk.

- I don't know really how to clean up an image that is too blurry like you say. I spent some time toying around with the various filters in GIMP and didn't find anything I liked.

- I like the door modifications, including making them thicker but couldn't make it look right. I ended up just using a basic transform and splitting the CEO's door handle like you did.

- I originally thought the steel ball statue was too sharp compared to the rest of the pieces, so I used some filter to blur it to where it is. I went back to the original and spent some time playing with the level of blur, but ended up liking what I originally had better. I suppose it's a matter of taste? Do you think it looks out of place or just bad?

- I concur on the wear patterns. I worked on that a bit, so let me know what you think.

Thanks again for all your help!
Top

Yeah, your changes look a lot better. The ball looks better which could be because of the contrast difference from the floor. Originally, the ball looked like a really small ball enlarged to fit the scale of map. The scene overall looks more natural.

My only remaining suggestion is to make your maps to fit a grid. If you use 50px grid in MapTool then the walls should fall centered on the grid line. Outer walls can fall on grid line or have the inner border of wall fall on grid line. The canvass outside the wall should be divisible by 50. So, if I have a square building that is 40ft by 60ft where 5ft is 50px then my canvass will be 500px by 700px. That gives me a 0-50px border around map for walls and shadowing. I go with internal wall thickness of 10% (5px to either side of grid line for 50px grid). When using MapTool and VBL, you never see pass the other half of wall anyway.
Downloads:
Top
Post Reply
4 posts • Page 1 of 1