I've shot your post in the dev section, lets see... I for one would be all for...but I'm not a Dev (at least not an MT dev).
GETTING STARTED WITH MAPTOOLS - TUTORIALS, DOCS, VIDEOS, TOOLS, ETC

I'd like to know, too! There is the general-dev section on Discord and there's the github repo but it seems like there is also a secret club out there for the cool kids.
MT Framework: Call of Cthulhu 7th fork, D&D 5e Spell Library
MT Scenario: Uncle Timothy's Will.
MT Utilities: Handouts, VBL Move Block, Date.
Top

The #general-dev is the perfect place.

We have another Discord server we use for management things (like web site issues and such). But the Discord channel that you all know and love is probably the best place if you need instant feedback, and the forum is better for long-term storage and a broader user community. (And the forums are Google indexed so they're searchable in a way that Discord is not.)
Top

Hi Rod, hope this is an okay spot to post questions. I'm trying out MapTools and your framework and so far I really like what I see, great work!

I have run into a problem where if I go to level up a character, I have only a "0" as my target (see attached). I'm trying this out as the GM, with a player token selected, and just clicking the level up macro. Am I doing something wrong? 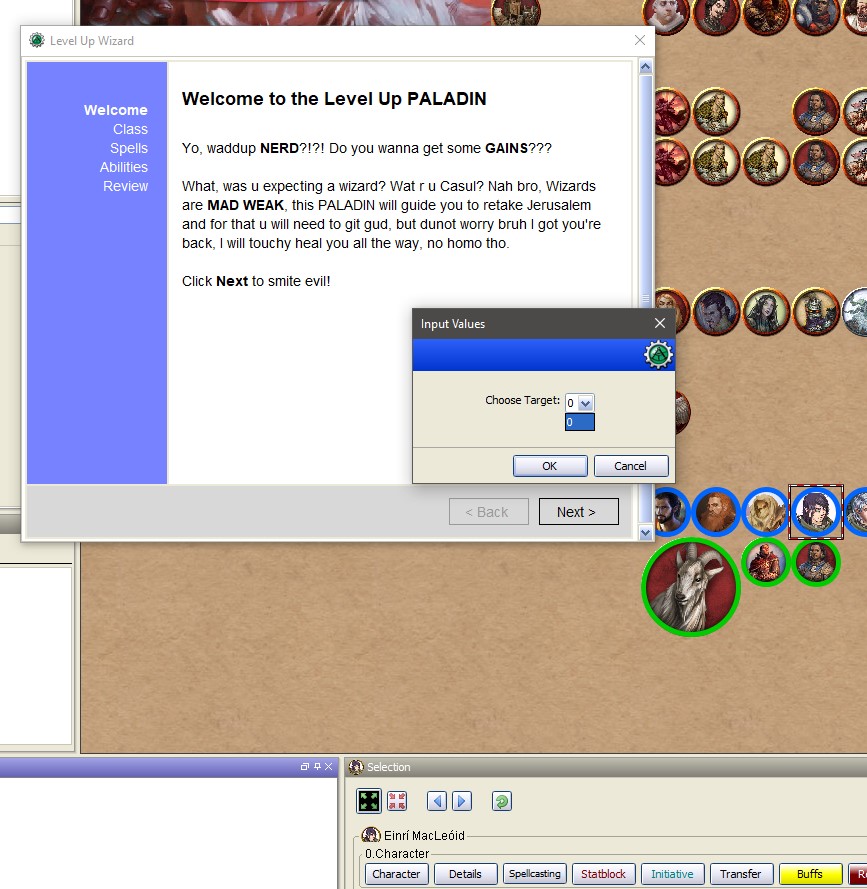 anathemort wrote: ↑
Tue Dec 03, 2019 11:11 pm
Hi Rod, hope this is an okay spot to post questions. I'm trying out MapTools and your framework and so far I really like what I see, great work!

I have run into a problem where if I go to level up a character, I have only a "0" as my target (see attached). I'm trying this out as the GM, with a player token selected, and just clicking the level up macro. Am I doing something wrong?

I ran into the same issue. You have to be set as an owner of the token.
Maptool is the Millennium Falcon of VTT's -- "She may not look like much, but she's got it where it counts."
Top

Ah-ha, that fixed it! Thank you!
Top

Sorry for the slow response =(

yeah, setting as owner is the solution, though you already now that at this time haha...

Thanks for the verification! Another setup question... I'm on the Bestiary map, trying to build a new NPC. I have added the token to the map (using TokenTool, just drag-dropped onto MapTool). I set the token to be a NPC and I selected it, then copied the basic macros from the campaign panel. I want to modify the statblock but when I click the statblock macro, I get this message in chat:

I'm sure I could get away with just copying an existing NPC and changing the token, but there must be a way to do this from scratch. Advice appreciated!
Top

This framework is fantastic, and it's totally revitalized my desire to use MapTool. Last time I used it extensively was almost a decade ago, which I mention for some context: I'm not quite good enough with it to figure out what's going wrong.

Skills and saves seem a little busted, using Datan Bernanrir (https://i.imgur.com/ngnYnPg.png) as an example. Somehow, he's gotten a -6 penalty to Charisma saving throws, despite only having a -2 penalty to Charisma, and he also has a +6 bonus to Wisdom saving throws despite having only a +2 bonus to Wisdom and a maximum of a +2 proficiency bonus, which doesn't even apply! Some of his skills are correct, and other ones are broken (only a +2 bonus to Athletics despite proficiency and a +3 strength bonus).

Even a brand-new, imported-as-image test token (https://i.imgur.com/pIYOM1y.png) seems to stumble into problems during character creation, with a mysterious +2 in Athletics where a +3 should be after pulling in the basic human and barbarian stats.
Last edited by Reasonableman on Thu Jan 02, 2020 11:19 am, edited 1 time in total.
Top

I hate to double-post but I couldn't edit the last one (until I posted this); I've been digging a bit and found out the solution to at least one problem. On the [email protected]:Character macro, when the Athletics variable is created, there's a hanging chunk of code that was likely supposed to replace part of an if statement, so it doesn't work unless you have either Jack of All Trades or Remarkable Athlete.

I believe users can fix the other issues on tokens by manually checking each proficiency bubble for which your character is not proficient. Setting it as "not proficient" seems to re-initialize whichever variable is being initialized incorrectly.

Oh, and if there's some kinder or more useful way I could troubleshoot/bugfix please let me know, I'm just having a lot of fun with this.

EDIT: I found the problem with the weird skill/save numbers. [email protected]:Character uses properties like "StrengthSaveMod" to keep track of proficiency; it stores a value of 0 for no proficiency, 1 for regular proficiency, and 2 for expertise. Eventually, this is multiplied by your proficiency bonus and added to your ability mod to give you your skill/save modifiers. Early on, however, these properties are checked for a null value, and if one is found, StrengthSaveMod is set to the value of Strengthmod, the property for your character's actual ability modifier: what was supposed to be a value between 0-2 dependent on proficiency is instead a number (usually between -4 and +5) based on your ability score, and this gets messy very quickly. Simply replacing "getProperty("_____mod")" with a 0 in the trueExpr field in the block of setProperty(if( calls where all ____SaveMod and ____CheckMod values are checked causes new characters to generate properly; you can also "cure" old characters by simply calling the Change [email protected]:Character macro for each skill and save, or manually changing all those ___SaveMods and ___CheckMods to values between 0-2 as appropriate.

EDIT 2: Also, you can fix the AC entry issue where it demands a string by replacing a line in [email protected]:Character with

EDIT 3: [email protected]:Character has a neat feature where it can create a link to itself so you can easily roll for critical hits. Unfortunately, either a regular expression isn't strict enough or a replace function is too broad, as it's possible to have it pass on part of a diceroll: if CustomRoll deals 1d6+6 damage, for instance, it strips out the flat 6, but also the other 6, passing 1d+ to itself. 2d6+2 would similarly pass on d6+, 4d4+4 would pass d+, and so on. To fix this, I replaced the line

and I have almost no idea why this works; I just noticed that extra plusses were building up in the raw variable and looked for a place to remove them, and eventually noticed that on the first iteration of that count loop, flat didn't have the value it does on every subsequent iteration. I imagine I'll need to do something similar for raw2.

EDIT 4: If you're using this framework and having trouble setting up an NPC token (lots of Unknown JSON type "" in function "json.fields" errors or similar) be sure that your info macro has a JSON object formatted in the manner of 5e.Tools, and that it possesses at a minimum the following elements:
Some monsters and NPCs don't have all of these features on 5e.Tools, so you may have to add them manually. Also be sure they don't have too many nested elements: MapTool's parser has a limit to the number of nested [/{ bracketed statements it will handle inside one another.
Last edited by Reasonableman on Sun Jan 05, 2020 12:20 am, edited 1 time in total.
Top

another framework to steal from ...

I'm just going to keep posting little bugfixes as I find them if nobody objects? This framework is so good, I want to make sure people can find fixes for the weird little problems; ones introduced by patches to the later versions of MapTool, for instance.

The Lib:Stream functions need a good cleaning out, as 1.5.7 swapped out "StopStream" and "getStreamProperties" for "stopSound" and "getSoundProperties," and there may be other functions that got swapped around there, I'm not sure.

EDIT: [email protected]:Bestiary attempts to use "," as a delimiter in a function with ";" as the default in the "Reactions" section, two times. A quick replace allows the reactions roller to function properly.
Top

Reasonableman, would you mind hosting somewhere the Lib: tokens that you have altered to correct some of these aforementioned bugs and giving us a link to download them? Seems a more efficient method of error correcting than having every reader attempt to reproduce your efforts.
"You must be the change you wish to see in the world."
- Mahatma Gandhi

"You know what the chain of command is? It's the chain I go get and beat you with until you understand who's in ruttin' command here."
- Jayne