Alignments cause arguments all the dang time in campaigns. And the way I see it is that alignment is a relative thing in most cases (with some things like infanticide being generally seen as evil and so on). That a paladin may see themselves as lawful good but may appear as lawful evil to everyone else. As such, I don't see alignment as series of nine categories (since no one can usually agree on what they specifically mean or how to interpret them). I see alignment as a gradient, as a blend of many variables with many outcomes. After all, most of the time the alignment system is represented by a Cartesian plane, so then why not have a coordinate based alignment system?

All in all, I believe that alignment is meant to help guide role-play but that too often it dictates role-play instead. And don't even get me started on magic that influences alignment =_=.

Anyways, I made a gradient alignment chart with a grid on it to help track things, use it as you will. 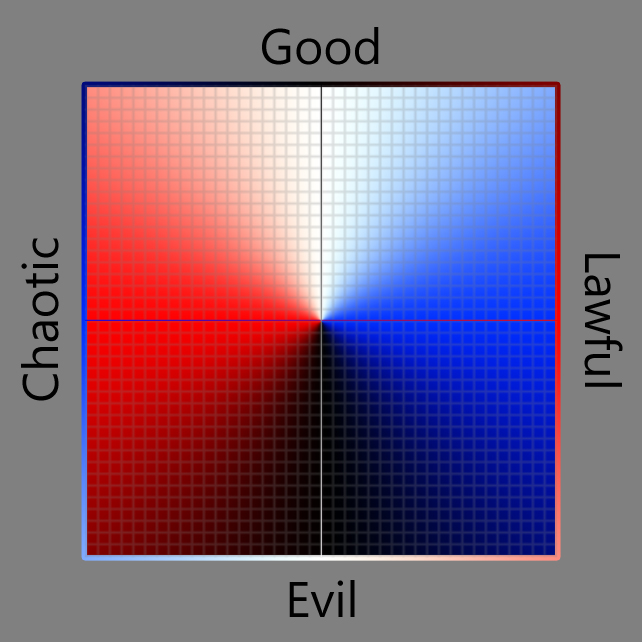 1.) Each character/NPC gets 100 alignment points.
2.) Assign points in terms of relative % of their motivations and influence.
3.) Minimum of 5 points in each category as no one is pure anything, people are more complicated than that.
4.) The alignment points refer to, proportionately, how a person leans in terms of alignment

Alternatively, the point of not being able to have 100% in any alignment nor 0% is that someone is always capable of acting against the majority of their beliefs or ideals, and that no one is beyond doing something in any of the categories. This is intended to help inspire more complex role-play by asserting that the character is, by default, more complex than just a member of one of nine categories.

You could just have a character's alignment be a single point on the chart since there is a grid on it already. Allows for variation and relative degree without bringing in percentages.

mfrizzell wrote:Very unique approach. I'll have to give it some thought before deciding to use it or not. I appreciate your ideas.